I woke up to a flat tire the day after SXSW had ended. I was relieved that I made it back to Manor the night before and didn’t end up on the side of the road at a ridiculous hour. I decided it was best to rest for the weekend anyway. The only place I went for a few days was with Bill to the park. Rural Texas was starting to look festive with wild flowers starting to span the grass. Every other picnic pavilion had kids out hitting a piñata and there were several games of competitive soccer. We walked for a while and took in the scenery of the Colorado River.

Tuesday after my restful weekend, I pumped up my tire and went to the repair shop to patch my wheel before heading to San Antonio. Over the weekend I had also discovered Roadtrippers.com and had found some suggestions of things to see – the first of which was Barney Smith’s Toilet Seat Art Museum.

I called the number listed on the web, after circling and circling a residential neighborhood filled with adorable bungalows. Yes, this is a cute neighborhood, but I don’t see anything that looks like a museum. An old man with a thick accent answers the phone, “Yes, I’ll be right back to open up for ya. You can park on the street right next to the garage.” Ok, so I guess my GPS did tell me right. I walk up to a chain-link fence to a backyard and I spy an old man with a cane walking up from the back porch. “I’ll open up for ya.”

Inside the garage was over 1,000 toilet seat lids, all decorated with every subject imaginable. Barney Smith then kept me there for hours telling me about every single seat cover and his whole life story. When I tried to leave, he kept me there another 30 mins talking. The highlight of the museum was getting to sign my name to the Smith family crest! I also signed the Georgia seat. Barney is a 91 year old retired plumber. His museum has been featured on several t.v. shows. He has the shows on tape and will play them for you. He has been married to his wife for over 65 years. She hasn’t been able to get out of bed for two years. The Hospice people come by every day and take care of her. He wishes he was able to get her gall stone for a seat he did in remembrance of her surgery. She made sure he didn’t get it. Like my Smith family, Barney Smith is also United Methodist and like some other Smith’s I know, he’s a talker.

I hit up a local restaurant for a healthy salad before getting to the Alamo. It was very historic and interesting, but I think one of the best parts was the beautiful courtyard. I saw the place where Davy Crockett was shot. The bullet holes are still in the wall.  I also saw a historic leather belt buckle with the last name Jimenez on it –  my friend Rodrigo needs that. I stuck around until they shut the place down, which is actually pretty early, WAY before sunset.

I meandered over to the River Walk. Restaurants and hotels are all along the River Walk. It is San Antonio’s tourist destination. By this time it was dinner and I was looking for an affordable place to eat where I could charge my cell phone. I found this place that had a great view, but the food unfortunately tasted like someone had decided to just throw in a bunch of chili powder and call it a day. The river was fascinating though. It was the best place to people watch and take pictures of the varied scenery. In some places you could climb up to street level and hear live music or see some beautiful old buildings. It was also a good time to make my phone calls. I got a little nervous as I ended up not seeing my exit to the street. I asked a security guard where the locks were on the river and I found out that the river walk actually merges off in a few places and I had walked past the branch I was suppose to take, so I turned around and walked back some on the other side to drive back to Manor. 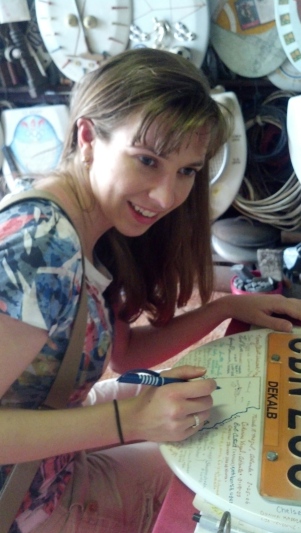 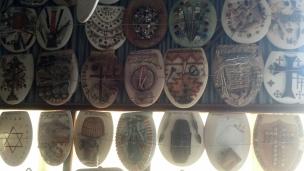 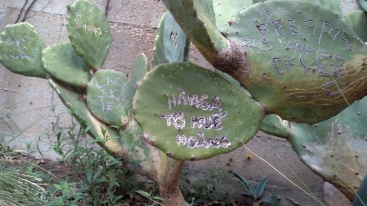 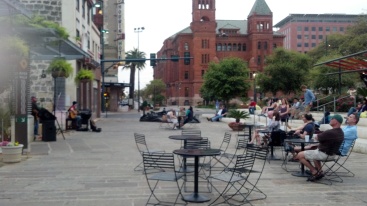