In Como, I made up my mind that I was going to try to find this swimming hole that I had pinned on Pinterest that mapped out as pretty close by. Pinterest has a new mapping feature, which is pretty cool if you’re traveling! So I used the hostel wifi at breakfast to pull up Google Maps and see what the transportation situation was like. I found out that while this place wasn’t very far away, I was going to need to change trains in this town called Bellinzona and because I would likely be getting in mid-day, I would need accommodations for the night.

Researching Bellinzona I found out that it actually is a UNSECO World Heritage Site with three castles! Pretty awesome! So I packed up my backpack (which was extra small as I had left my backpacking one in Milan and was traveling with a school sized backpack… yeah, I wore the same clothes over and over… but it’s good to travel light), booked my hostel and I walked to the Como train station. Well, first I walked to the wrong train station, but they straightened me up over there. Because I walked to the wrong station, I missed the first train and spent the majority of the afternoon hanging out at the train station.

I point this out because people think that traveling or vacation is all glamourous and pleasant all the time. Yes, it is wonderful, but part of the reason why I’ve seen so many amazing things is because I’ve been ok to eat PB&J, stay in and work, sleep in my car, accidentally go to the wrong place, hurry up and wait, wear the same thing over and over, ride long distances.

To make the most of my waiting, I logged into Couchsurfing and started messaging all the girls in the area that listed English as one of their languages. I got back a response! Whoo! I was invited to join some college girls, Alessia and friends for Apéritif.

The train ride through the alpine lakes was beautiful. I thought it was a little strange to pass into Switzerland without anyone looking at my passport. I didn’t really realize that I wasn’t in the Eurozone when I stopped in a cafe and ordered a drink to get wifi. The woman behind the counter said, “I guess that will work.” and I was thinking, “What’s wrong with my money? I gave you the correct amount!” I paid for the hostel online, so it didn’t make any difference what currency I was using, but later that night I had to stop at a Bancomat (ATM) and get some Francs.

As soon as I arrived in Bellinzona, I was drawn to Castelgrande. It lords over the entire city and it’s historic walls run beside modern apartments and office buildings. It was all the beautiful things that you’ve ever imagined about a castle – walking through it, I felt like I had entered a scene from a fairy tale or one of my favorite fantasy novels. My favorite thing was running down the grassy castle walls and taking in the view of the vineyards, city buildings and mountains. It was the type of place where you just wanted to get lost wandering. 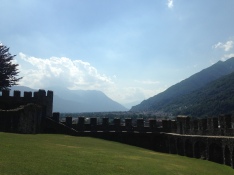 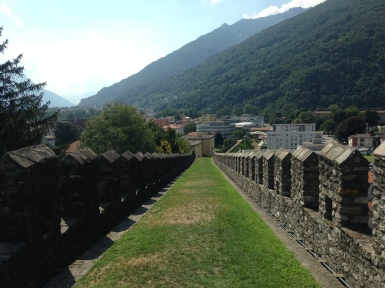 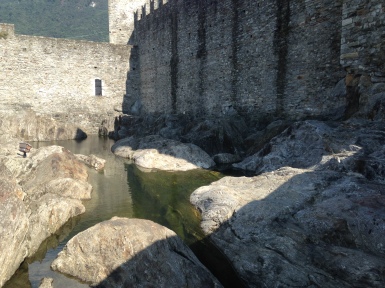 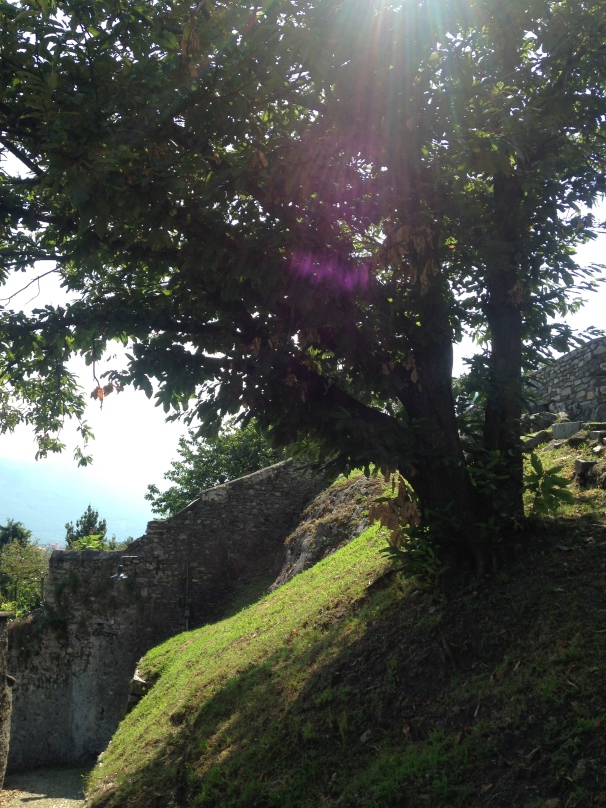 When the day was starting to wind down, I was met outside the hostel by Alessia and friends. We hung out and drank spritz and ate prosciutto appetizers. They seemed to know everybody. The way they talked about Bellinzona, Switzerland – so beautiful, so boring. Bellinzona is a small historic town, but the largest town in the area, reminded me of small town Thomasville, Georgia – so beautiful, so boring. They way the girls talked about moving somewhere more exciting while standing surrounded by all the beauty was so familiar. Really we aren’t so different in the world.

After Apéritif, the girls took me to see another castle. Outside were older people playing these long traditional regional horns. The girls said it was great that I got to see that while I was visiting, because the horns were only played every once and a while by older people. Another great view, this time it was like looking down at a map, “There’s our school.” “I was a lifeguard over there at that pool.” “Wow, Castlegrande looks amazing from here!” 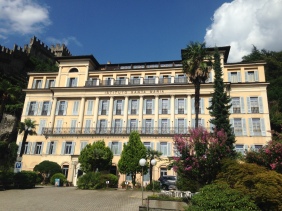 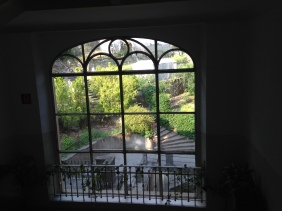 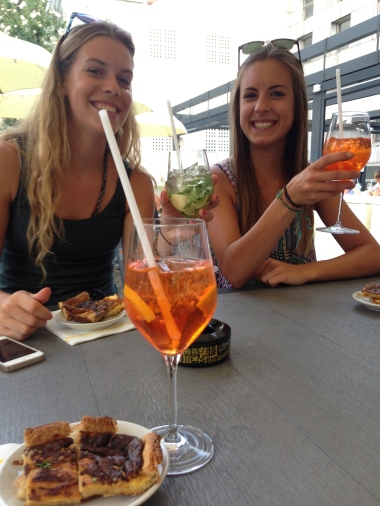 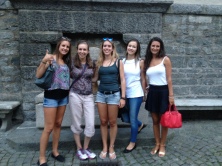 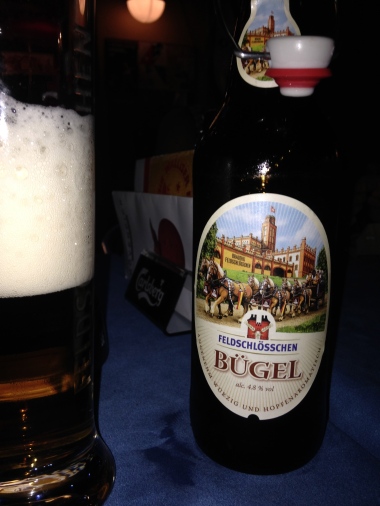 After the castle we went for dinner and drinks, more people came in – they really did know everyone! I found out the hostel was an old Catholic boarding school. It was cool to hear the history of where I was staying from the girls’ mothers who remember when the school was open.

The next day I woke up early to catch the train and then a bus on my way to find the swimming hole. I got off at the Contra Dam, which was made famous by a James Bond movie, where Mr. 007 jumps off the bridge. Because of that movie many people were bungee jumping. I will not bungee jump. I did enjoy watching the dare devils though. I couldn’t find the swimming hole though. I saw some really cool historic vineyards and cottages, but nothing that looked like the picture. I finally got up the nerve to ask the gift shop for directions and they handed me a brochure written in five different languages.

The brochure showed me that I had been given a bus ticket for the wrong stop! The place I was trying to get to was a 9 hour hike away! Luckily, Italians… and I guess maybe the Swiss too… never check the bus tickets. I just hopped on the bus again and made my way further up into the mountains.

I saw where the swimming hole was, but decided to take the bus up one more stop to the next little town and hike a trail down. I’m so glad I did! Walking through the countryside, woods and over stones was so scenic. Seeing rushing water, farms, camps, bathers, waterfalls and ruins – such wonder! I finally made it to the swimming hole from the picture. It is underneath this old roman bridge called the “jumping bridge”. I didn’t look safe to jump from, but two men from the crowd made the plunge. It was just as beautiful in person as in the picture online and I felt so accomplished finding the place!

The water was cold, but crystal clear. I jumped in off the rocks and visited with some Canadians and English speaking Germans. I got a nice hearty soup from a local rustic cafe. The sun started to set and concerned I hung around the bus stop. Luckily it wasn’t too late. I showed up in Milan at Kenneth’s front door around midnight like a cat coming home after prowling for days – full of stories. 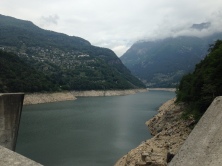 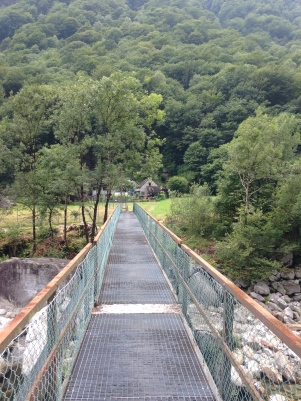 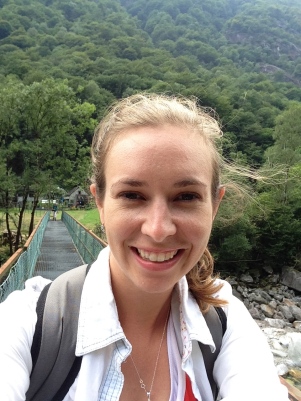 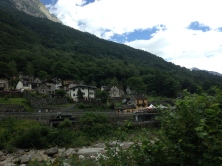 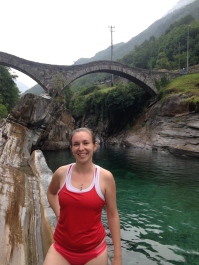