Left My Home in Georgia, Headed to the ‘Frisco Bay

San Francisco is the weirdest place I’ve been. I heard I would love it. I heard I could make way more money if I lived there. Well, I suppose I could make more money if I lived there, but considering the price of rent it wouldn’t really mean very much. The hostel was twice as expensive as any hostel on my trip. In addition to being more expensive, I also had to pay $24 for 24 hours to park my car in a nearby garage. I did the math and determined I wasn’t going to be staying in San Francisco for very long.

The HI San Francisco City Center was one of the most beautiful hostels. I rolled my suitcase across the marble floor of the lobby in the old 1920s hotel feeling elegant. The hostel was filled with unique and beautiful decorations, a chic romantically lit bar and a mezzanine on the second story that overlooked the lobby. They played old black and white movies at night, but I didn’t stay in very much. 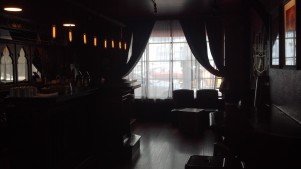 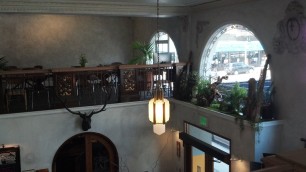 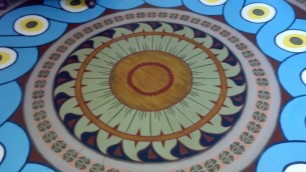 The best decor of any hostel I’ve been to!

I spent some time walking around the neighborhood aka Little Saigon. San Francisco is filled with beautiful architecture, there were interesting shops and galleries in the area to stop in, murals to take pictures of and TONS of homeless people. Actually all of San Francisco is filled with people living on the street, which makes the entire city kinda dirty (um… that poop on the sidewalk probably isn’t dog poop. Dog owners are pretty good about scooping up in California. Sidewalk squatters aren’t quite as considerate.) Feeling a little overwhelmed, I decided to call the one person I know in San Francisco – my friend Robin I met at the hostel in Austin during SXSW. Here’s the recap if you want the background story.