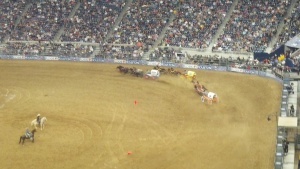 The beginning of March, I stayed in Houston with my sorority sister, Amandine. She is a graduate student at a university there. On Thursday night I arrived just in time for the Houston Livestock Show and Rodeo. Three other girls were at the apartment waiting on me. A car and then a train later, we were scouting out fair food. Between the four of us there were giant baked potatoes, a foot-long corn dog, a turkey leg, over a dozen fried Oreos and… fancy metal flasks.

I never realized that a rodeo contained so many different events. We played a ridiculous game of telephone in the bleachers as cowboys and a few barrel racing cowgirls roped, wrangled and rode in the dirt far below. The highlight of the night was the Mutton Bustin’ competition, where five year-olds are padded up and sent off riding lambs. A little guy named Brody won. They presented him with a man-sized belt buckle and asked him what was the secret to winning. He responded with a southern twang, “You just gotta keep you’re head down and hold on.”

The Zac Brown Band followed the rodeo show. I love their the song “Free”. It’s about a couple that travels in their van around the U.S. together and I think it’s one of the most romantic songs around… maybe because I fantasize about living out of a van/camper/RV with someone special. 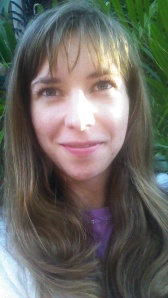 Sunday, decided to take myself out to see an art museum and a famous chapel. I arrived at The Menil Collection  just in time for a gallery talk. I felt very fortunate to have stumbled into the space just in time for a lecture. Unfortunately the gallery talk was on this series of large monochromatic canvases that looked like a large paint swatch hung on the wall. This lecture lasted for two hours, while all of the guests seemed to try to figure out what was so special about this most boring quadtych. I never figured it out.

I decided to move on to the chapel. I wondered what time its services were. I figured it must be something special about the Rothko Chapel with all the hype. After all it was featured in National Geographic’s Sacred Places of a Lifetime. I entered and left within 10 mins. I was thoroughly unimpressed. I realized very quickly that obviously no services were held there, as there were barely any seats in the building. The chapel felt sad. The artwork was dark and dreary. Hardly any natural light entered the room.

Nothing about it was joyful and within an instant I knew that this was a chapel in name only. No one had ever sung praises to God here. I had been in more spirit-filled living rooms. Turns out Mark Rothko was a jewish raised atheist who committed suicide one year before the chapel opened.

I left the Rothko Chapel and went to a site filled with God’s presence, the patio of El Pueblito Place. The palms swayed above me in the sunshine, as I munched on heavenly fish tacos and listened to running water and flute music. There were beautiful white curtains blowing in the breeze from huts where you could lounge on comfy white pillows. Yes! I had found paradise at last! 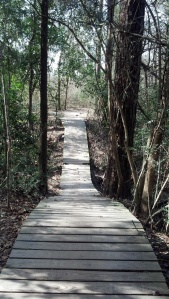 Later in the week, I went out while my friend was studying and discovered some pretty cool things to do for free that she had never heard of as a resident. I woke up early and headed out to walk the bike trails at the Houston Arboretum. It was a beautiful quiet morning and the trails wound around trees and streams. The Nature Center also had some interesting exhibits and trails.

Later that day I stopped by The Galleria and remembered why I hate malls. They did have an ice skating rink near the food court, which is kinda cool. At least I had some wonderful nature time that day.

Unlike New Orleans, Houston struck me as rather fake and superficial. Yes, the business buildings are nice, but the city is filled with people driving their expensive cars through pot holes. Everyone’s priorities seems a little out of place to me. Luckily, I was able to see some of the real Houston, the part people don’t drive by everyday during the surprisingly free Sam Houston Boat Tour. Departing from the Port of Houston, this boat tour allows you to set sail with the wind in your face past metal recycling facilities, giant commercial boats and oil refineries. Old rusty buildings and railroad tracks dot the landscape with the smell of sea salt and oil! The boat has the friendliest staff, who offer you free soda and coffee, while announcing points of interest.

For lunch after the tour, I headed down to Discover Green to catch some live music over a hamburger and return Amandine’s key to her office. While walking down the sidewalk I saw a familiar-looking side profile dart into a building. Is that him? Is that the yuppie guy I used to date? Well, he’d fit in around here. I pull out my cell phone and start to text, “Random question – Are you in Houston?” Oddly enough I receive the response, “I am”. I was then asked if I would like to “hang out tonight” or “at least have dinner”, but by that time I was already on the interstate heading west to make my Blue Bell  factory tour and I had ice cream, an Austin hostel and the road on my mind.

“When it comes to leavin’ I hope you understand. Lord, I was born a ramblin’ (wo)man…”